Did you know that the ancient Greeks had a word for celiac disease? Or that research indicates gluten might not be the only culprit for millions of people with gluten sensitivity? Or that treatments beyond a gluten-free diet might be on the horizon?

In March, I co-presented a talk with John Gildae, PhD, at Natural Products Expo West 2015 on The Evolution of Gluten and Gut Health. My part covered the history, current state, and future projections of celiac disease and the gluten-free movement. Dr. John followed up with a science-based look at how gluten affects the gut, current statistics regarding its effect, and in-the-works treatments for those with celiac disease and gluten sensitivity. (For more about his work, contact him at johnjgildae@gmail.com.)

Several people have asked me for a review of that talk, so here it is, along with my slides.

Please keep in mind: I am not a scientist or a health care professional. I presented my material from a journalist’s perspective and that of a mom: My son, Sam, became severely gluten intolerant while at college after showing absolutely no signs of gluten intolerance while growing up. Today, both he and my daughter eat a strictly gluten-free diet.

I gleaned much of my information from the excellent book Gluten Freedom by Alessio Fasano, MD, whom many consider to be the foremost authority on celiac disease and gluten sensitivity. 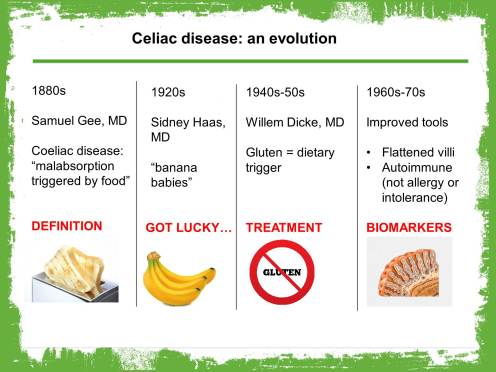 Wheat, and by extension the gluten protein that’s also found in rye and barley, has been part of human evolution for 10,000 years, since the dawn of farming. About 2,000 years ago, a Greek physician named Aretaeus coined the term koiliakos (for “suffering in the bowels”), the word that eventually became “celiac.”

But not until the 1880s did celiac disease appear in the medical literature. At that time, a British physician, Dr. Samuel Gee, gave a talk that established the first medical definition of celiac disease (CD) as a malabsorption triggered by some kind of food. In his words, CD was “a kind of chronic indigestion which is met in persons of all ages, yet … especially apt to affect children between 1 and 5 years old.”

Dr. Gee was right on target when he said that “if a patient can be cured at all, it must be by means of diet.” Unfortunately, his treatment consisted of thinly cut and well-toasted bread. (Fail.)

Then, in the 1920s, a New York City pediatrician named Dr. Sidney Haas developed the banana diet for celiac disease, giving rise to an entire generation of children called banana babies. The diet worked—there’s no gluten in bananas, after all—but again missed the mark for causation. Even so, the banana diet remained the standard therapy for another 30-40 years.

Then came a true breakthrough: In the 1940s-50s, Dr. Willem-Karel Dicke of the Netherlands definitively connected gluten as the dietary trigger for CD, thus giving rise to the first effective and lasting treatment: the gluten-free diet. (Consequently, Dicke is rightly considered the father of the gluten-free diet.) At this time CD was thought to be a gastrointestinal condition confined to northern Europe and Caucasians, and, still, primarily children.

In the 1960s-70s, improved diagnostic tools made it possible to see actual CD biomarkers: flattened intestinal villi, which became the defining hallmark of CD. Rather than healthy fingerlike projections, as seen in Slide 1, CD-damaged villi look like the top of a marshmallow. This biomarker also helped distinguish CD from a food allergy, which is a histamine-based and anaphylactic response that the body can outgrow. In contrast, CD was now classified as an autoimmune condition, which one does not outgrow. If you have CD, you have it for life, though the intestinal tissue damage can, in fact, be reversed.

In 1996—amazingly, less than 20 years ago—the Center for Celiac Research (CCR) was established in Maryland (now at Mass General) as the first CD, wheat allergy, and gluten sensitivity research and treatment center in the U.S.

At that time, CD numbers worldwide were thought to be 1 in 184 – and it was discovered not just in Europe, but also in Libya, Egypt, north Africa, India and China. CD was, however, still considered rare to nonexistent in the U.S.

In summary, here’s what was understood about CD at that time:

Slide 4: Why are so many people eating gluten free?

Let’s take a slight detour into the manufacturing scene. As many people know, sales of GF foods exploded in the past 5-8 years, going from $4 billion in 2007 to just over $8 billion in 2012, with a projection of $18 billion by 2018 (Nutrition Business Journal Special Diets report).

This growth can’t be explained by people with CD disease alone (even though the rate of CD is doubling every 15 years; see link under Slide 7).

This gives rise to the question: Why are so many people buying and eating GF foods?

Slide 5: Confusion in the news

Unfortunately, the fad mentality creates a confusing environment that media is all too happy to misreport.

In 2011, an Australian research group published a double-blind, placebo-controlled study that supported the evidence that non-celiac gluten sensitivity is real.

But then, in 2013, the same study authors published a follow-up that seemed to contradict their original study: “in contrast to our first study, we could find absolutely no specific response to gluten.”

The suspected culprit: FODMAP foods, highly fermentable but poorly absorbed carbohydrates. (More on this in a minute.)

In 2014, the media world exploded with relish:

The Consumer Reports article in particular was surprisingly out of touch; it compared early-generation, empty-calorie and nutrient-devoid GF muffins with “regular” muffins for sugar, fiber, and such, while completely ignoring the wealth of delicious and nutrient-dense options now available to GF eaters. I appreciated Ashley Koff’s tweet after the CR story came out: “All this story did was show that a crappy diet is well…crappy – frustrating & not what I’d expect.” Amen, sister!

Slide 6: Is it gluten, or something else?

The real takeaway from that second, “contradictory” study was the focus on FODMAP foods. FODMAP stands for Fermentable, Oligo, Di-, Mono-saccharides And Polyols — carbohydrates (sugars), found in a wide variety of foods, that are poorly digested or absorbed, which can lead to digestive distress.

Researchers found that reintroducing gluten didn’t necessarily cause a reaction in subjects, but FODMAP foods did. In other words, a carb in wheat might be causing the very real symptoms now attributed to gluten.

In February, I came across a brand-new food label that’s already on some packaged foods in Australia: FODMAP Friendly. I’m now wondering whether we’ll start seeing this new label on foods here in the U.S. soon.

In light of the media firestorm and resultant confusion, I appreciated and recommend Jennifer Iscol’s May 2014 article, “Fake Gluten Sensitivity or Incendiary Journalism.” In it, she quotes Amy Burkhart, MD, RD: “Perhaps gluten sensitivity will soon be given a new name as it doesn’t appear the gluten is always the issue.”

Might we start hearing “wheat sensitivity”? Perhaps even “FODMAP sensitive”?

Keep in mind, as Dr. Burkhart points out: “The existence of celiac disease is not under debate. It is non-celiac gluten sensitivity that is under the microscope.”

With celiac disease and gluten research continuing, here’s where we stand today. According to current reliable estimates:

As mentioned earlier, a 2010 study of 3,000 healthy adults for 50 years found that the rate of CD is doubling every 15 years, “due to an increasing number of subjects that lost the immunological tolerance to gluten in their adulthood,” according to study authors.

“Something has changed in our environment that’s driving an increased incidence of celiac disease,” said Joseph Murray, MD, a Mayo Clinic gastroenterologist, in a March 2013 Reuters article. “Whatever has happened with CD has happened since 1950; the increase affected young and old people equally,” he added in a 2014 article.

Slide 8: Why the change from gluten tolerance to intolerance?

So, the big question that I get asked all the time: WHY has the human body switched from gluten tolerance to CD and gluten sensitivity? After all, people ate gluten safely for thousands and thousands of years; as a friend asked me skeptically just last month, “why the hell is gluten suddenly such a problem?” What has happened to make CD and NCGS  so prevalent and, indeed, increasing?

Many theories exist. Among them:

Incidentally, addressing gut permeability may hold the best promise for effective therapies beyond lifelong adherence to a gluten-free diet. In a 2012 research study, Dr. Fasano wrote, “The classical paradigm of autoimmune [disease arising from] gene makeup and exposure to environmental triggers has been recently challenged by the addition of a third element, the loss of intestinal barrier function [i.e., the breakdown of tight junctions]. … New therapeutic strategies aimed at reestablishing the intestinal barrier function offer innovative, unexplored approaches for the treatment of these devastating diseases.”

According to another 2012 study, non-GF-diet treatments currently being explored include zonulin-blockage therapies, a therapeutic vaccine to induce gluten tolerance, and degrading the gluten protein using probiotics.

Researchers are now really focusing on how one or a combination of these and other theoretical causes are affecting the human microbiome and therefore gut health in general. As Dr. Fasano says in Gluten Freedom, “What happens to [people] to make them switch from tolerance to the immune response that leads to celiac disease? I believe the answer … is indeed related to changes in the microbiome.”

(For an excellent overview of the microbiome, I recommend this short NPR video, The Invisible Universe of the Human Microbiome.)

Is gluten-free here to stay? Absolutely. Celiac disease is real and on the rise; gluten sensitivity, whether from wheat or FODMAPs or changes in gut bacteria, is also real and on the rise. As stated in a December 2014 report by the Hartman Group, “The lasting growth [in gluten-free purchasing and eating] rests with people who avoid gluten in order to improve their digestion, and who do it by eating less processed, whole-grain foods. … Gluten free reflects the cultural belief that digestion is the root of all wellness.”